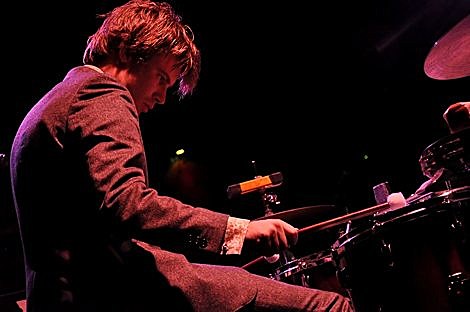 Miller Theatre joins forces with the Wordless Music series to present a week of specially curated concerts highlighting the best of each organization's aesthetic and mission. For five nights, indie-rock and electronic-music performers share the stage with artists from the classical- and new-music world, for a week of unorthodox and unconventional musical meetings.

Of those five nights, four lineups at Columbia University's Miller Theatre (2960 Broadway at 116th Street) have been confirmed. Those will take place as follows...

Those concerts are an addition to Wordless's upcoming schedule, which currently includes the Alarm Will Sound show tonight (July 22nd) at LPR, the Liquid Liquid & Rhys Chatham "200 Electric Guitars" performance on August 8th at Damrosch Park at Lincoln Center, and the Warp20 NYC series in early September.

The original "802 Tour" (the Doveman date above) took place in 2008. No word on whether they are actually going on tour again, or if this is just a one-off date with the same name.

Do Make Say Think and The Happiness Project also have a bunch of other tour dates scheduled, including two other NYC shows. Grouper is also playing ATP NY. Destroyer is going on a very short tour at the end of July that brings Dan Bejar to Bowery Ballroom on the 30th. All dates and a video from Doveman's June 18th show at LPR, below...