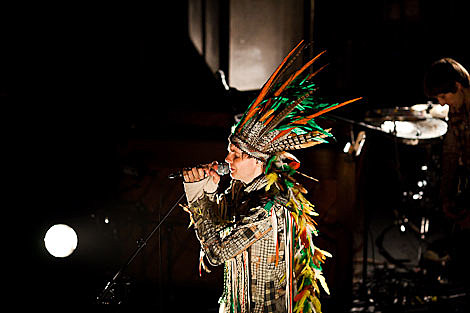 White Light Fest runs from October 28th-November 18th, and its other shows include Antony and the Johnsons at Alice Tully Hall on October 30th (that's their only North American show this year). That's now sold out. Listen to Antony's new LP, Swanlights, at NPR.

Also part of the White Light Festival is an October 28th show featuring the Meredith Monk and Vocal Ensemble at David Rubenstein Atrium. That crosses over with another new music series, Target Free Thursday at Lincoln Center's David Rubenstein Atrium. The full schedule for those shows, which run through December, is below. There's also free DJ nights at the Atrium on Saturday night; that schedule is below too.

To bring it back to Wordless Music, Kronos Quartet will be at (Le) Poisson Rouge for two nights this weekend (Oct. 8 and 9), each with different sets of mostly-new music. The first night includes pieces by Terry Riley and Michael Gordon (both with assists by Young People's Chorus of New York City) and young composers Bryce Dessner (of the National) and Missy Mazzoli (of chamber group Victoire). The second has another new work by Gordon, music by JG Thirwell, and new Schubert arrangements, reworked by vocalist Judith Berkson, who'll also be on hand. Unfortunately, both nights are sold out.

And since we mentioned Brooklyn composer Missy Mazzoli above, it should be noted that her band Victoire plays a free show at Dumbo gallery Smack Mellon on November 4th. Victoire's new album, Cathedral City, just came out on New Amsterstam. Their schedule is below too.

The full Free Thursdays schedule and more info is below...