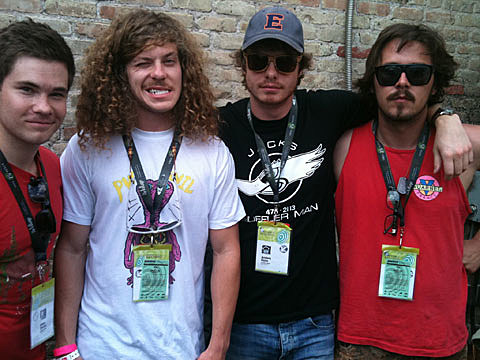 If you were down in Austin for SXSW this week, you may have run into the cast of the upcoming new Comedy Central series Workaholics. Blake Anderson, Anders Holm, Adam DeVine, and Kyle Newacheck made an official comedy appearance at Esther's Follies in addition to appearing in various capacities at FADER, SPIN, VICE, and BrooklynVegan events. If you were at the BV day party Saturday at Barbarella, you may have caught them introducing Mount Kimbie (who played after Trail of Dead and before Daedelus on the outside stage).

If you weren't at SXSW but still want a chance to experience them live and are in NYC, they're going to be at Brooklyn Bowl at 6pm on Monday (3/21). There's free beer too, and it's free to get in, but you need to RSVP to get in.