World's Fair at Santos in 2012 (more by Julie Schabel) 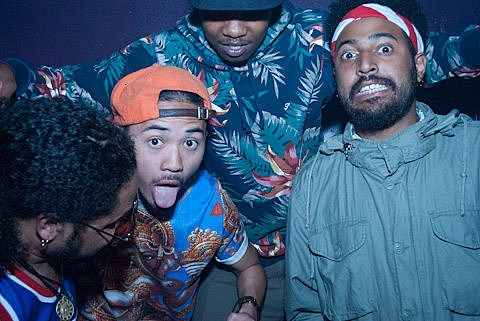 As mentioned, Hot 97 DJ Peter Rosenberg has a new compilation out today (4/4) called The New York Renaissance, which highlights the current NYC rap scene with tracks from A$AP Rocky, Action Bronson, Joey Bada$$, Flatbush Zombies, Smoke DZA, Troy Ave and more. One of the artists on it is Children of the Night-related Queens crew World's Fair, who we've caught at a few local shows like Fool's Gold's 5th anniversary and a 2012 show with Danny Brown. Their contribution to the mixtape, "'96 Knicks," sees the members spitting rapid fast rhymes over a similarly blown-out take on '90s NYC rap production to that of Flatbush Zombies. You can download that track at the top of this post and stream it below. The whole mixtape can be downloaded for free at DatPiff and streamed below.

You can catch World's Fair playing a local show on April 17 at Public Assembly with Chicago rapper Rockie Fresh, Julian Malone, and DJ Getlive!. It's a Scion/AV show and the only way to get in is through Scion's twitter/instagram contest.

That show is one of a few upcoming dates for Rockie Fresh, all of which are listed, along with the World's Fair song stream, below...