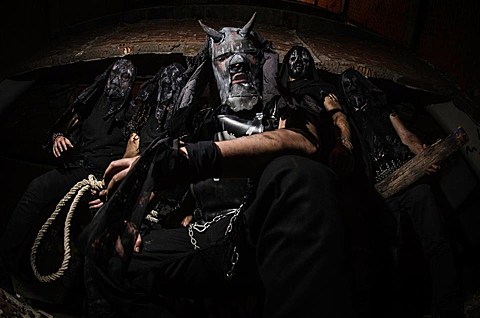 The Spanish technical death metal band Wormed released one of my favorite metal albums of 2013 in their wackadoo sophomore effort Exodromos. When I came across Wrong -- a black metal side project featuring Wormed burp/squealer Phlegeton -- I jumped at the chance to check out their sophomore album, the rather ESL-sounding Pessimistic Outcomes.

The album comes out on April 22 via Xtreem Music, and we just premiered a full stream of it over at Invisible Oranges today. Like Wormed, Wrong tend towards the theatrical, but that's pretty much where the similarities end; Wrong play a restrained and decidedly morose version of BM that has little in common with Wormed's off-the-wall insanity. From our IO writeup:

Phlegeton's delivery in Wormed boils down to an array of squeals, burps, and chirps -- it works great over technical death metal, but is almost singularly ill-suited to mopey black metal. He's a talented vocalist and I expected him to modify his delivery, but perhaps not this much. The guttural component of his voice is almost completely absent here, replaced by a thoroughly effects-bathed range of washy sighs and shrieks that's heavily reminiscent of Wrest's delivery on the last couple of Leviathan records. His work here is a novel match for this otherwise conservative strain of black metal, and the album benefits considerably from it.

You can stream Pessimistic Outcomes in full below...