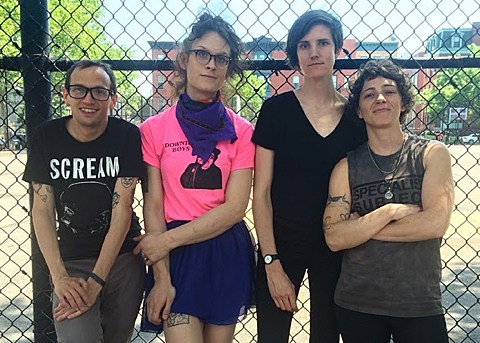 We recently heard Brooklyn punks Worriers tackle the frustrations of the gender binary on "They / Them / Theirs," and now they're speaking out against the police force on new single "Yes All Cops." Both are from their upcoming Laura Jane Grace-produced album Imaginary Life (due 8/7 via Don Giovanni), and they're as melodic as they are defiant. Listen to "Yes All Cops" and another recent single, "Plans," below.

Worriers are playing a few dates on the upcoming Cayetana / Chumped / Thin Lips tour (including Asbury Park), and they have a record release show announced for NYC. That happens the day the album comes out at Knitting Factory (8/7) with Adult Mom, Fleabite and more. Tickets are on sale now. All dates are listed below.

The NYC stop of the Cayetana / Chumped / Thin Lips tour is presented by BrooklynVegan and happens August 15 at Baby's All Right with a special guest. Tickets for that show are still available.

UPDATE (7/7) Worriers were also just added to the first Summerscreen show, playing before Clueless in McCarren Park on Wednesday (7/8). They are the first band to be booked after Todd P pulled out of booking the series this week.

Worriers - "Yes All Cops" (via Stereogum)