Wrekmeister Harmonies at Saint Vitus in 2013 (more by Greg Cristman) 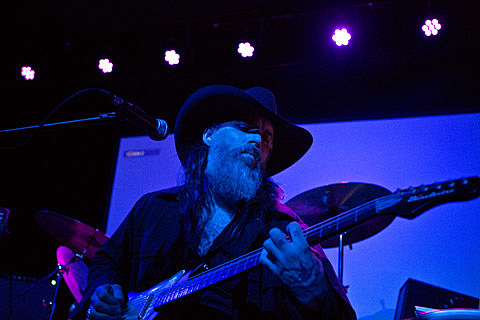 Wrekmeister Harmonies, the experimental doom brainchild of Chicago-based performing artist J.R. Robinson, have announced an NYC performance of Robinson's most recent epic Wrekmeister piece, Then It All Came Down, which is based on an interview between Truman Capote and Charles Manson-associate Bobby Beausoleil and was released last month on Thrill Jockey. The show will take place at Brooklyn's Signal Gallery on December 14, and tickets are on sale now.

Wrekmeister Harmonies performances are big events, as they generally feature an impressive visual component and always include an ever-changing cast of a-list heavy avant-garde musicians, and this one is no exception. The live band will feature Dave Pajo (Slint, Tortoise), Emil Amos (Om, Holy Sons), Dylan O'Toole (Indian) and members of Liturgy. Robinson doesn't perform much, and especially not outside of Chicago, another reason that his shows are more art events than your standard touring metal band, so this one should be pretty awesome for those New Yorkers who can catch it.

Before the NYC show, the band also play Chicago on December 6 at Bohemian National Cemetery -- those are their only two dates at the moment. Check videos of Robinson and company performing "You've Always Meant So Much to Me" (via Pit Full of Shit) and "Then it All Came Down" (via unARTigNYC) at Saint Vitus last year, below.