photo: Bell Witch at Acheron in 2012 (more by Fred Pessaro) 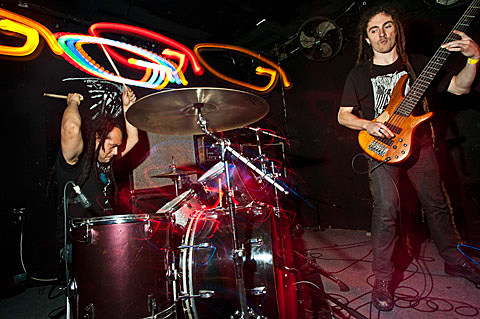 We mentioned that Seattle's Bell Witch are touring with Wrekmeister Harmonies in December behind the Chicago group's Night of Your Ascension, both playing a set of their own music and serving as the backing band for Wrekmeister's J.R. Robinson. Now the two serious-minded doom outfits have announced another run dates across the east coast in early 2016, some of which will include Pallbearer.

The tour will kick off in NYC for a show at Saint Vitus on 2/23 (unfortunately no Pallbearer on that one). Tickets for that show are on sale now. All dates are listed below.

Bell Witch released Four Phantoms, one of the best doom albums of the year, back in April. They've had a busy year, recently playing Northside Fest and Martyrdoom. Wrekmeister Harmonies just put out a new video for "Night of Your Ascension" starring David Yow of The Jesus Lizard, which features Yow at a scary feast. It's as insane as that sounds.

Stream Four Phantoms, watch the Wrekmeister Video, and check out all tour dates below...