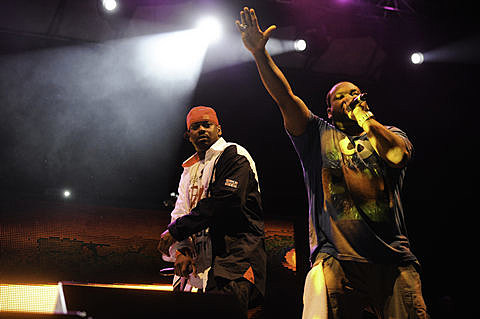 Wu-Block -- the new project of Wu-Tang members Ghostface Killah and Raekwon and D-Block/The LOX members Sheek Louch, Jadakiss, and Styles P -- are set to release an album this year. It will be performed live at Rock the Bells, whose lineup recently expanded to also include DMX, Eve, Mix Master Mike, Pusha T, Future, and still more TBA. As mentioned, the fest comes to the NYC area on September 1-2 at PNC Bank Arts Center. Tickets are still available. The updated flier is below.

Ghostface and Sheek Louch will be heading out on the Wu-Block Tour with Saigon surrounding Rock the Bells. That tour hasn't been announced in full yet but we know that it includes a show in NYC at Highline Ballroom on August 8. Tickets for the Highline show go on sale Friday (6/15) at noon.

You can catch Ghostface in NYC even sooner at his free Celebrate Brooklyn show at Prospect Park on June 23 with Camp Lo, Astro, and more.

Speaking of Raekwon, he just announced a Best Buy Theater show (7/26) with Tyler, the Creator and Earl Sweatshirt.

A list of all currently known Wu-Block tour dates, some videos, and the updated Rock the Bells flier below...