Ghostface at Prospect Park in June (more by Ryan Muir) 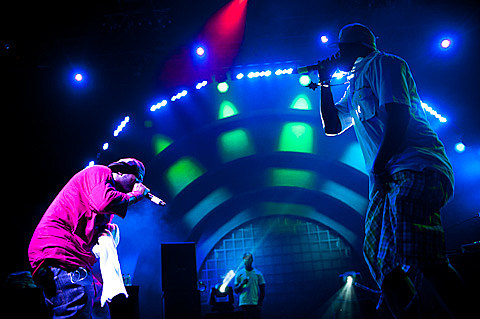 Wu-Block, the project of Wu-Tang members Ghostface Killah and Raekwon and D-Block/The LOX members Sheek Louch, Jadakiss, and Styles P, recently went on a tour in support of the new project, having hit NYC's Highline Ballroom earlier this month (8/2), and they'll play Rock the Bells at Holmdel, NJ's PNC Bank Arts Center this weekend (9/1). The tour only included Ghostface and Sheek Louch, but the whole crew is reported to show up at Rock the Bells.

Ghostface and Sheek Louch will be taking Wu-Block on another tour this Spetember, and like their last one, Saigon will support. That tour hits NYC on September 17 at Highline Ballroom. Tickets for the NYC show are on sale now. All dates are listed below.

Saigon is set to release his next album, The Greatest Story Never Told 2: Bread & Circuses, on November 6 via Suburban Noize/RED (pushed back from its original 9/11 release date). The album will feature guest spots from Styles P, Killer Mike, Chamillionaire, and others, with production from Just Blaze and others. It follows his much delayed 2011 debut album, The Greatest Story Never Told.

All listed Wu-Block dates are below.