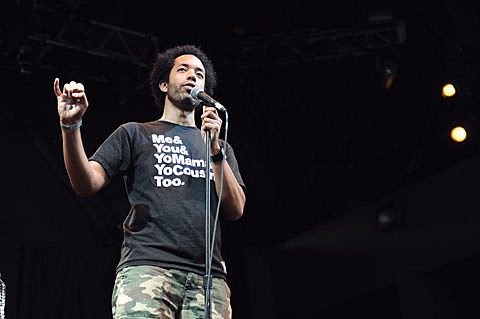 In a post titled "Starting Mondays in November until Littlefield realizes they've made a huge mistake", Wyatt Cenac, who spent this weekend at Fun Fun Fun Fest, details the plans that will likely drive Gowanus venue Littlefield toward financial and social ruin.

Comedian Wyatt Cenac ("The Daily Show," "King of the Hill") and Producer Marianne Ways ("Hot Tub with Kurt and Kristen"), in conjunction with Littlefield, are proud to announce the start of new weekly comedy showcase NIGHT TRAIN WITH WYATT CENAC. Hosted by Brooklyn-based comedy favorite Wyatt Cenac, the show will feature comedy from the best local and international stand up comedians, and will at times feature new and established musicians, local celebrities, and occasional surprises that can only be found in Gowanus.

Of course all of this reconfirms the end of Kurt and Kristen's weekly Hot Tub Variety Show at Littlefield, which held its last Monday show in October. RIP to Hot Tub, but we're looking forward to Night Train.