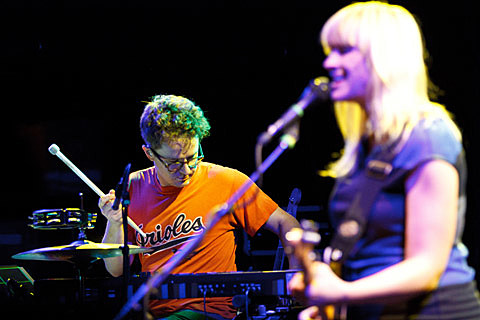 Wye Oak's last album, 2011's Civilian, took the band to new levels of success and when it came time to make the follow-up, Jen Wasner and Andy Stack could have easily made Civilian Pt 2 and rode the indie folk train to new heights of popularity. Instead, the duo are shaking things up considerably for their as-yet-untitled fourth album which they made at Brooklyn's Rare Book Room studios. Wasner told SPIN:

There's not a lick of guitar on this whole record. It basically inverts what we were responsible for. Andy was playing droney bass lines on keyboard. Now he's responsible for the more upper register stuff that guitar would normally handle, while I'm playing bass lines on a bass guitar. The idea was really appealing to me because we had sort of hit a wall, just with the complete and total excess of touring that we had done, the use and overuse of that format. It tainted the guitar for me and I was finding it really, really hard to get anything out of it from a writing perspective. I wasn't excited about it -- too much baggage. It just felt tired to me.

While no release date or other info has been released yet, Wye Oak do have tour dates coming up on their way to SXSW (they're playing Savannah Stopover too). They'll also be at Coachella this year, and on the other side of that they'll play NYC at Webster Hall on May 7. Tickets for Webster go on sale Friday (1/24) at noon.

Jen Wasner is currently on the road this week as part of the touring tribute to Gene Clark's No Other that also features members of Beach House, Grizzly Bear, Fleet Foxes, Lower Dens, The Walkmen and more. That will be in NYC this weekend for sold out shows at Music Hall of Williamsburg on Saturday (1/25) and Sunday (1/26).

All Wye Oak tour dates are listed below.