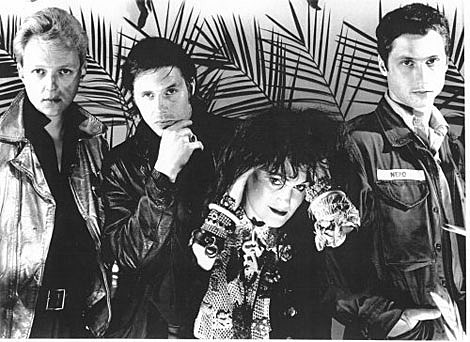 Their first four albums had a hard-driving sound that occasionally flirted with rockabilly and blues; one critic suggests that X "were not just one of the greatest punk bands, but one of the greatest live rock acts of all time." By the time of their fifth album, Ain't Love Grand!, the band had taken a more mainstream hard rock-oriented direction, and began to appear on shows such as American Bandstand. X, however, had previously appeared on television for a 1984 performance on Late Night with David Letterman. [Wikipedia]

Last time members of legendary West Coast punk band X were in NYC town, it was just "Exene Cervenka and John Doe of X". They played shows at Joe's Pub and Music Hall of Williamsburg in January. Next time it will be the full band, at Bowery Ballroom, and for three nights in a row. Tickets for the May 29-31 shows go on sale Friday ($27 / $75 3 day ticket). All dates, and video from their recent appearance on Craig Ferguson, below...