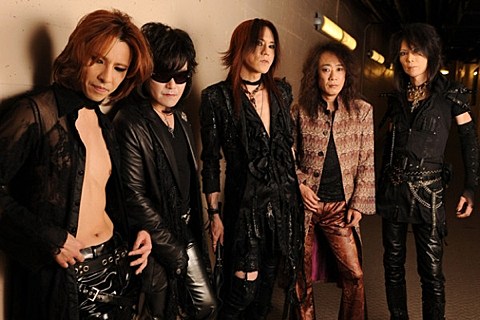 Long-running heavy metallers/visual kei stylists X Japan are returning to the United States for a special engagement at Madison Square Garden on October 11. It will mark the first time the Japanese quintet has performed in America since 2010. The upcoming show was recently teased by bandleader Yoshiki at a solo date in San Francisco, which was soon confirmed by the band's website. Ticket information and related details have yet to be announced but should be available soon via Ticketmaster.

If you're thinking, Wait, what. . .is playing MSG, here's a quick and dirty primer: While X Japan never broke big here, they're adored by an ardent base of fanatical followers all of the world. Formed in 1982, X unified rousing power metal with the over-the-top dress and hair of the visual kei scene, helping to further the latter's rise as one of the dominate pop phenomenons of '90s Japan. If you can picture Helloween made-over by '70s Bowie and '80s Simon Le Bon, you're in the ballpark. Their first real taste of success was 1989's Blue Blood, an hour-plus amalgamation of J-pop, hair metal, guitar heroics, and ripping speed metal. Their follow-up, 1991's Jealousy, debuted at number one on the Oricon charts and quickly crested one million albums sold. In 1992, X became X Japan after moving to Atlantic Records with eyes set on conquering the States. It didn't quite go down as planned, but no matter. The group had no qualms settling on inspiring an absolute frenzy at home.

X Japan split in 1997 and their future was put into further doubt when original shredder Hide passed away in 1998. However, the outfit reformed in 2007 and has been touring with a steady lineup from 2008 on. While their albums are worthy, the group is primarily known for their live performances, having released a dizzying amount of documentation. And now you can see them in the flesh and catch the buzz of an entire stadium going bonkers. Or, hey, perhaps you'll be purchasing a ticket as a re-acquaintance: You could've caught them in 2010 at Lollapalooza or in NYC at the Roseland Ballroom around the time Yoshiki appeared at Comic Con. Meanwhile, Yoshiki's classical solo world tour continues this weekend in Mexico.

Interest piqued? Check out the Blue Blood album, a Blue Blood-era show, and the nearly four-hour(!) The Last Live, below...