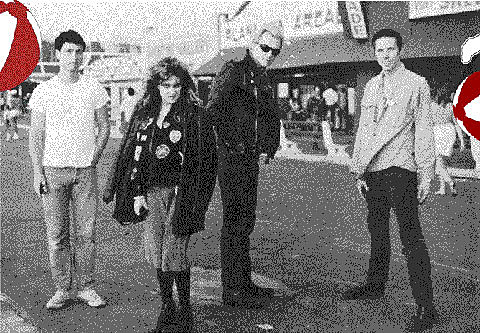 Much like the Damned (who will perform Damned Damned Damned and The Black Album on their upcoming tour), legendary punk band X will perform all of Los Angeles at some upcoming shows. They'll also host a screening of the classic documentary The Unheard Music when they hit Irving Plaza in NYC on September 30th and October 1st. Tickets for both shows, also available as a 2-day pass, went on Live Nation / Mobile App / Music Geeks presale today (6/14). General sale begins Friday.

Speaking of Los Angeles, the LA band is currently on tour in California where they're playing with the entire original lineup. That includes Exene who announced she was suffering from MS in 2009. That may be partly be because....

Nearly two years later, she reports that she may have been misdiagnosed.

"My doctor doesn't think I have MS anymore. He thought I had a virus, like a killer virus, then he decided I don't have that either. All I do is get tested - blood tests all the time. I go to a different doctor and they tell you something different, go to another one and they'll tell you something different. I've had so many doctors tell me I have MS, then some say I don't ... I don't even care anymore."

"It made me a better person, made me take care of myself, whether I'm sick or I'm not. I've learned that everyone is sick with something. Our immune systems are failing, especially women. I know so many women with fibromyalgia, lupus, MS, cancer -- breast cancer, primarily -- chronic fatigue syndrome, depression ... we're falling apart. We can't do the work of five people."

Cervenka takes vitamins every day, exercises, keeps busy and spends time with her companion Minnie, a four-year-old miniature pincher. She's known she's been sick for a long time, she admits, but given the runaround so many receive from the medical community, she simply tries to tend to herself and not think about it.

"I've taken care of myself my whole life or I wouldn't be alive now. Look at the people who were in the early punk scene or the L.A. scene -- so many have passed away. A lot of that was misfortune and accidents, and some of it was just youth, suicide and drugs. The people that are around now that I've grown up with, we take pretty good care of ourselves. I mean we'll go out and have a drink or smoke a cigarette, but we take our vitamins." [OC Register]

John Doe also has some upcoming solo dates, many of which are with Jill Sobule who he's been recording with.

"A Day at the Pass finally captures an ongoing collaboration between Jill Sobule & John Doe. It was funded entirely by their fans & w/ an all-star band, recorded live at The Pass studio on one fine day in Los Angeles.

It's available now as a digital download while a CD version, featuring 2 extra tracks, will be sold exclusively as part of Record Store Day beginning April 16th.

Included in both releases, for the hell of it, is a new garagey rockin' version of the "original" I Kissed a Girl."

You can listen to the CD with all tour dates, below...