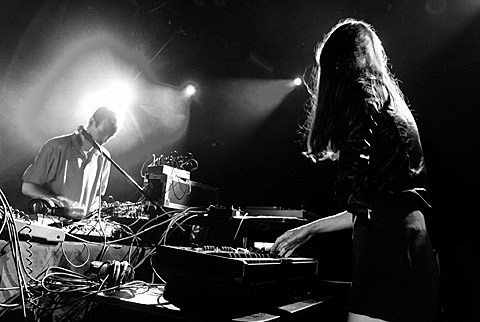 Your new album 'Par Avion' has been described as an ode to synesthesia. What conscious decisions were there to make it different from 'Sets & Lights'?

At the outset of recording this album, Liz was engaged in developing several perfumes, 'Eau de Xeno', hence synesthesia. There was never a conscious decision to do something different. There were of course newfound synthesizer processes that we wanted to employ and expand on. As our music largely grows out of live performance, this new material, in part, emerged out of the interstitial moments between the set of songs we were playing live, namely the songs from 'Sets & Lights'. For instance, Sheen grew out of the bridge linking Sunday with Blue. After which we form them into structured pieces. So in a sense 'Par Avion' was squeezed out of the gaps of 'Sets & Lights'. There is an internal logic integrated into not only the new album but also our entire catalogue. 'Providence' and 'Reflections' function as soundtracks within, and to this album and this logic. [Electricity Club]

Brooklyn synth duo Xeno & Oaklander released their new album Par Avion last week (6/24) via Ghostly. If you've yet to hear the "ode to synesthesia," you can stream it in full below.

As you may know, Xeno & Oaklander are opening the NYC stop of the 'Cascine & Friends Tour' happening on July 12 at Music Hall of Williamsburg with Cascine artists Chad Valley, Lemonade and Yumi Zouma, plus X&O's Ghostly labelmate Lusine. Tickets for that show are still available.

About a month later, the duo play another hometown show, this time headlining, at Baby's All Right on August 15 with White Hex. It's a midnight show, and tickets are on sale now.

All upcoming dates are listed, with a stream of the LP and the title track's video, below...