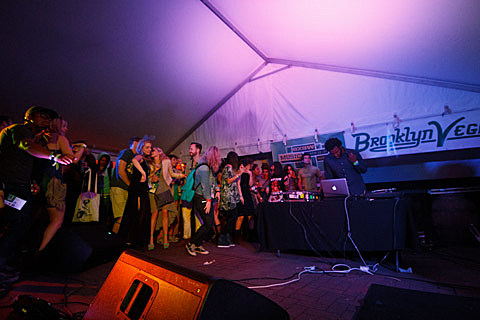 Exciting young Beyonce/TLC/Alt-J/etc-sampling electronic musician XXYYXX has a few dates scheduled this summer, and will be coming to NYC for the Warm Up summer concert series at MoMA PS1. As mentioned, he plays on July 13 with a great lineup of Ryan Hemsworth, Bondax, MK, Gobby, and James K.

The day before Warm Up, XXYYXX will be in Brooklyn for a headlining show at Music Hall of Williamsburg (7/12) with Chrome Sparks (live), Fortune Howl, and DJ True Panther Sounds. Tickets for that show go on sale Friday (6/7) at noon. XXYYXX's 2012 self titled debut LP is great for the headphones, but he's a hell of a dancefloor commander too. So if that's your kind of thing, these NYC shows are not to be missed. A full stream of his LP is below.

Tickets for all Warm Up shows go on sale today (6/5) at noon. Other artists playing the series (which runs from June 29 to September 7) include Majical Cloudz, Liars, Mr. Muthafuckin' eXquire, J. Cole, Juan Atkins, Jon Hopkins, and many more.

All XXYYXX dates are listed, along with the LP stream and a video, below...

XXYYXX - "About You" Official Video