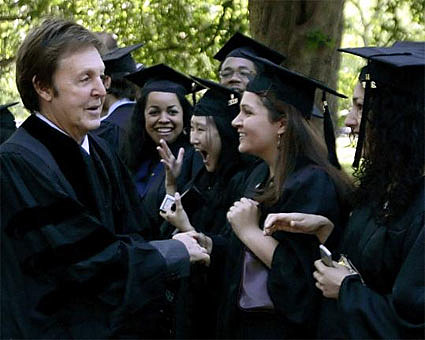 Paul McCartney can now add one more honor to the numerous awards, accolades, and the knighthood he has received. The former Beatle yesterday was awarded an honorary Doctor of Music degree from Yale University. In granting the honorary degree to McCartney - Sir Paul McCartney since he was knighted in 1996 - the university said no one compares with the legendary songwriter. Yale said the 65-year-old McCartney awakened a generation, giving a fresh sound to rock, roll, rhythm, and blues. A band played "Hey Jude," a Beatles hit, as McCartney walked on stage to accept the honorary degree. New Haven was the site of a British invasion of sorts on Sunday, as McCartney and former Prime Minister Tony Blair were in town for Yale's 307th commencement.
[The Boston Globe]

In sorta related news, Ringo Starr is touring this summer.