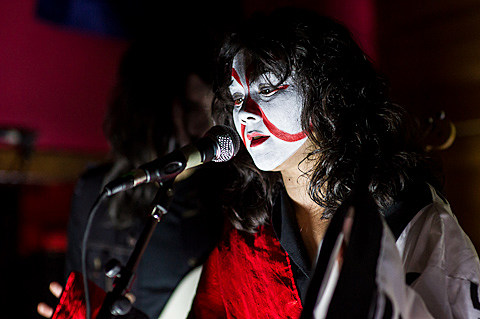 Canadian costumed-face-painted-progressive-psychedelia collective Yamantaka // Sonic Titan have already announced they're coming to our side of the border for CMJ, and it's since been revealed that they'll be doing a quick North American tour after that as well. Those dates include another NYC-area appearance on Halloween (10/31) at Basilica in Hudson, NY (where the Basilica Sound Scape festival just happened). That show is with Norwegian art pop musician Jenny Hval (who also has NYC shows coming up), plus special guests Tanz Praxis (featuring C. Lavender). Tickets for the show will be available via Basilica's site soon.

YT//ST's one currently announced CMJ show is the Panache showcase happening on October 16 at Knitting Factory with Jacco Gardner, Saint Rich, U.S. GIrls, Slim Twig, and Arp. Tickets for that show are still available, and you can also try to get in using your CMJ badge.

YT//ST also just made a video for "One" off their upcoming album UZU (due out 10/29 via Suicide Squeeze), which you can watch, along with the list of all tour dates, below...