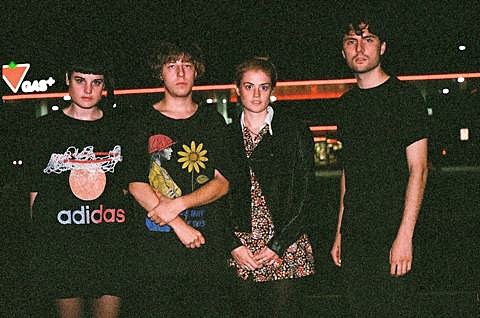 Our friends at M for Montreal will be down for CMJ again for their showcase which, as in years past, happens at Arlene's Grocery on October 18 with Yamantaka // Sonic Titan, TOPS, Pat Jordache, CAMP, Kandle, A K U A and Foxtrott. Tickets are $10 at the door, or you can get in with a CMJ badge or Evening Showcase Pass (based on capacity, of course).

Yamantaka // Sonic Titan, who formed in Montreal but now reside in Toronto, are probably the best-known band on the bill, and will release their new album, UZU, on October 29. The multi-hyphenate band are better known for their theatrical live shows which you should witness if you can. They're on late at 1 AM. UPDATE: YT//ST are now playing at 10 PM. They play 285 Kent at 1 AM later that night (see below).

YT//ST are also playing at least two other shows during CMJ: the Panache showcase at Knitting Factory on October 16 with Jacco Gardner, Saint Rich, U.S. GIrls, Slim Twig, and Arp (tickets); and the unofficial Pitchfork show with Speedy Ortiz, Priests, Joanna Gruesome, Perfect Pussy, Eleanor Friedberger (solo), and Courtney Barnett (tickets). (Currently both P4K and M have Y//ST's settimes as 1 AM, some shifting will likely happen at Arlene's.) After CMJ, they'll play Basilica Hudson on Halloween, which sounds like a pretty good time, too.

TOPS played CMJ last year and are working on the follow-up to 2012's Tender Opposites which came out on Arbutus Records (Grimes, Doldrums, Blue Hawaii). You can stream that, in all it's lite R&B indiepop splendour, below.

It's been almost two years since Pat Jordache last played NYC and they've undergone a somewhat radical reinvention since then into dark postpunk territory, though not your average influences, pulling from Jah Wobble style dub, and mid-'80s 4AD (to my ears at least). You can stream their three digital singles from this year below ("O.M.O." is excellent). You can also catch Pat Jordache at Silent Barn on October 17 with CAMP (who also play the M showcase) and Chicago's J Fernandez. More info on that show here.

Pat also plays in CAMP, who share a similar vibe, with some slinky funk -- complete with '80s-style watery bass, -- on their track "Little Boy Blue," which reminds me of, um, Kajagoogoo. (In a good way? Maybe Japan is a more palatable comparison.) You can stream it below.

Kandle is Kandle Osborne whose father, Ben, is the singer of long-running extremely popular (in Canada) Canadian band 54-40. Sam Golberg of Broken Social Scene produced her debut EP (streamable below) and plays in her live band.

A K U A spent time recently as one of Solange's backup singers and, recently, has been collaborating with Twin Shadow drummer Andy Bauer, the results of which can be heard on this year's One's Company EP, which you can stream some of below.

As for Foxtrott, that is the name Marie-Hélène L. Delorme records under. Her music is definitely dance pop but don't look to compare her to other one-named Montreal singers -- it draws from a variety of global influences and is pretty good. Judge for yourself: a few tracks are streamable below.

As M for Montreal has done every year, the night starts off with a "poutine party" that is free and open to the public. During that time (5 - 7 PM) there are a couple Francophone acts playing, Quebec city rapper Webster and VioleTT Pi.

Song streams, videos, and the M for Montreal showcase schedule below... 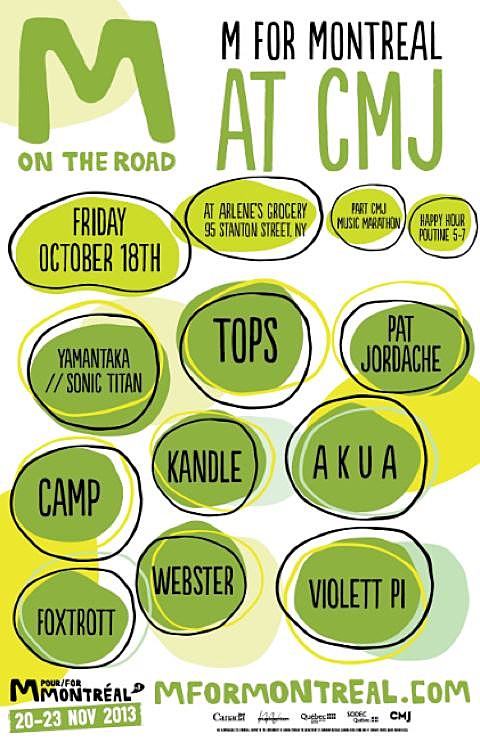