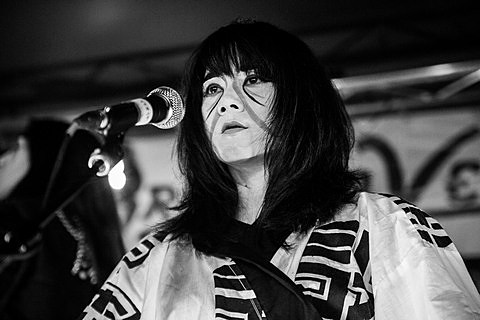 Theatrical Canadian rockers Yamantaka // Sonic Titan are returning to our side of the border for SXSW and Austin Psych Fest, and they'll also be playing a number of club shows around then too. One of the shows is in Brooklyn on April 13 at Baby's All Right with local post-black metal band Sannhet. Considering the slight metal tendencies of YT//ST that pairing isn't entirely out of left field, but it's still a bit unexpected and sounds like it should be awesome. Tickets for the Brooklyn show are on sale now.

The rest of the US dates are with Perfect Pussy, whose tour has them in NYC a few days before YT//ST's Baby's All RIght show.

You can also catch Sannhet sooner when they play Saint Vitus on March 20, opening for Nothing. Also on that bill is Dark Blue (mems. Clockcleaner, Ceremony, Purling Hiss) and York Factory Complaint. Tickets are still available.

All YT//ST dates are listed, with streams from them and Sannhet, below...