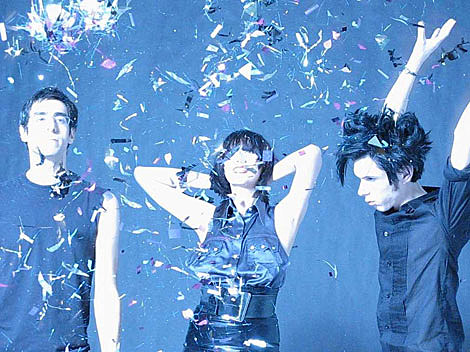 "Since becoming a vegetarian I've felt a new openness and lightness. Channels have been cleared and obstacles have been removed; energy is flowing more freely from top to bottom. An elimination of obstructions, both physical and spiritual. And with this I've discovered a new sensitivity."
-[YYYs drummer Brian Chase on the band's site]

Today (3/10), New York art-rockers Yeah Yeah Yeahs released their third album, It's Blitz!, digitally (available from iTunes in deluxe and regular versions). Physical copies come out in the US on March 31st and worldwide on April 6th, and right now, the record is streaming on the YYY's Myspace.

The '80s-inspired video for the first single, "Zero," was directed by Barney Clay who, with Karen O, previously directed the video of Tiny Masters of Today's "Hologram World," among others. Watch both of them below.

As far as touring, Yeah Yeah Yeahs have announced a number of European summer dates, plus three US festivals so far - Coachella (4/19), Sasquatch (5/23), and Bonnaroo (6/12). Stay tuned for more future tour info as it becomes known.

The YYY's Brian Chase drummed on a track for Brooklyn's Dynasty Electric. That song, posted above, will be included on the band's forthcoming Land of Dreams record.

Besides the YYY album, video, and tour dates, the Yeah Yeah Yeahs have been releasing bizarre art-film shorts, dubbing their creation the SNAKESWEAT TRILOGY - both released clips are below. The band also covered The Ramones' "Sheena Is A Punk Rocker" on the War Child: Heroes benefit compilation.