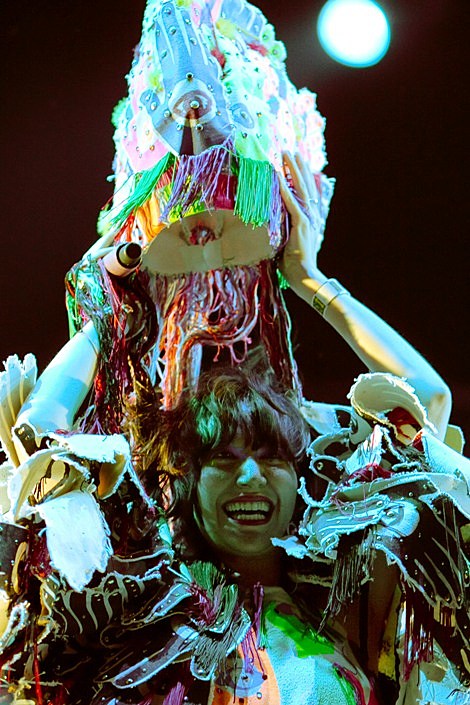 "DGC/ INTERSCOPE TO RELEASE WHERE THE WILD THINGS ARE MOTION PICTURE SOUNDTRACK: ORIGINAL SONGS BY KAREN O AND THE KIDS. ALBUM OUT SEPTEMBER 29! LEAD SINGLE "ALL IS LOVE" OUT DIGITALLY AUGUST 25! MOTION PICTURE IN THEATERS OCTOBER 16!

Inside Karen O is a Wild Thing - as singer for the Grammy-nominated Yeah Yeah Yeahs, her wild thing is in your face, vulnerable, obnoxious, tender, exciting... a self-proclaimed "spazoid." However, to Oscar-nominated Where the Wild Things Are director Spike Jonze, Karen O and her music possess a child-like innocence, a guileless charm that put her exactly on the right emotional wavelength to sonically capture the highly-anticipated film.

As the press release says above, the song "All is Love" is out today. You can listen to it at MySpace.

In related news, the Yeah Yeah Yeahs are playing Music Hall of Williamsburg in Brooklyn on September 29th. That's six days after their much larger Manhattan show at Radio City Music Hall which sold out, I am told, in less than a day (UPDATE: There are a few random single tickets still available for Radio City at the moment, so not completely sold out yet)... I'm sure the MHOW show will sell out in less than a minute when tickets go on sale Friday at noon (2-ticket limit, will call only, opener TBA).

Some related videos below...