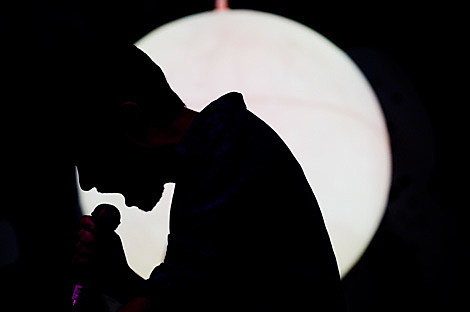 Yeasayer recently revealed in an interview with Pitchfork that they had finished their sophomore album and it would be released on January 19, 2010. There are four new songs they've been playing live; the four new songs are "Madder Red," "O.N.E.," "I Remember," and "Amblin' Alp." Yeasayer has also hinted that they would do something big in October.... [Wikipedia]

One "big thing" Yeasayer will definitely be doing in October is playing the next date of Guggenheim's It Came From Brooklyn Series on Friday, Oct. 30th. Rounding out the lineup are Tanlines (their only scheduled show as of now), author Rachel Sherman and comedian Max Silvestri as MC. Tickets are on sale.

Guggenheim's last "It Came From Brooklyn" show featured Julian Plenti aka Paul Banks from Interpol. Julian has more shows on the way in November.

Yeasayer is currently in the UK, on tour with Bat for Lashes (who played NYC in August).

Yeasayer's Anand Wilder and Ira Wolf Tuton worked on Bat for Lashes' new record, Two Suns, which came out in April. As for their own still-untitled CD, Yeasayer's new disc is expected early next year (see above). Pitchfork called their last album, All Hour Cymbals, the 197th best album of the decade.

At least one member of Tanlines (also playing the Guggenheim show) is in a new group with members of Professor Murder called Restless People.

A Jools Holland video, and all tour dates for Yeasayer, which include Fun Fun Fun Fest in Austin on November 7th and Brown University on Nov. 13th (with Javelin), are below...