Yeasayer at Jones Beach in 2011 (more by Dana (distortion) Yavin) 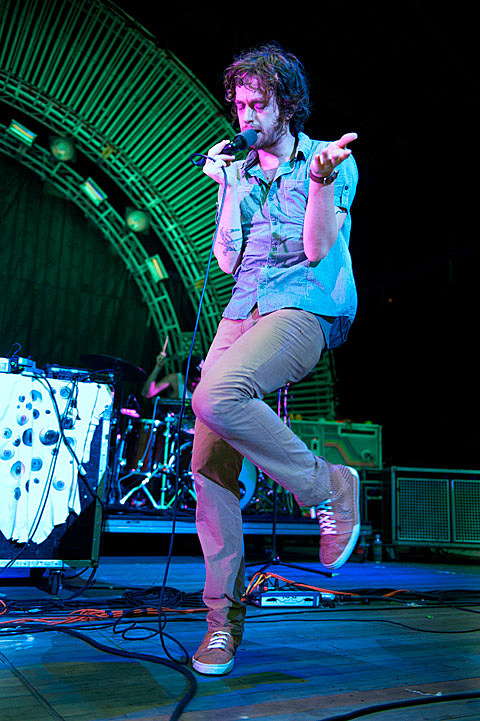 You may remember that back in late 2009, the leak of Yeasayer's Odd Blood album surfaced about two months before its release, and now Yeasayer have "received message" that their new record, Fragrant World (due out 8/21 via Secretly Canadian), is on the verge of surfacing as well. Because of this, the band have decided to stream the album themselves... if you want to call it that. They've hidden "track visualizers" (created by Yoshi Sodeoka) for each song on the album around the internet, and it's your job to find them in scavenger hunt fashion. They're calling the scavenger hunt "PREEMPTIVE SELF-COMMISSIONED YEASAYER VORSTELLUNG or TRACK VISUALIZER" or PSCYVOTV for short. Clues on how to find the songs will be revealed at the Yeasayer twitter and the Secretly Canadian twitter. Seems like a lot of work to have cranked out quickly because you heard the album was going to leak.

You've already heard/seen "Henrietta" and "Longevity" (both of which are below), and as of this post "Blue Paper," "No Bones," "Reagan's Skeleton," and "Damaged Goods" have been found, and are also below. The songs will be online until Friday (8/3) at 8 PM EST, when they will be removed. Secretly Canadian is also running a contest for 4 winners who can find all 11 songs to win a deluxe bundle of Fragrant World and 4 more winners for the regular edition.

As mentioned, Yeasayer are currently on tour and will hit MHOW on August 15 (tickets on sale Friday [8/3] at noon) with Daedelus and the much larger Central Park Summerstage on September 12 with Daedelus and Tanlines (not Daughn Gibson, like we initially said). Tickets for that show are still available.

Videos and Yeasayer's complete letter below...

Yeasayer - "No Bones" (via Rolling Stone)

"We have received message that we are on the verge of embargoed information being leaked through the cracks of the digital universe. Once again an attempt to tell the story before our mouths can spit. In order to have the edge we have created PSCYVOTV standing for PREEMPTIVE SELF-COMMISSIONED YEASAYER VORSTELLUNG or TRACK VISUALIZER.

"Using the talents of Yoshi Sodeoka we have created a moving visual for every song on our new album FRAGRANT WORLD and have hidden them all over the internet. The visuals will live on the web until Friday at 8pm EST. You'll have a few days to find, listen, and most importantly, hear the album from our hands first. At 8pm sharp PSCYVOTV will be removed."