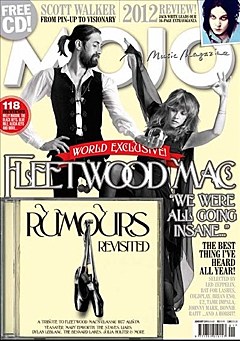 This month's issue of UK music magazine MOJO features a free CD titled Rumours Revisted, a tribute to Fleetwood Mac's landmark 1977 album, Rumours. (Not the first time a Fleetwood Mac tribute album came out this year.) The compilation features covers by Yeasayer, Liars, Julia Holter, Pure Bathing Culture, The Besnard Lakes, Dylan LeBlanc, and more. You can stream Yeasayer's take on "Second Hand News" and Liars' reworking of "The Chain" below, and to hear the rest of the album, you might have to get your hands on a copy of the new issue of MOJO or scour the internet for a download. (Side note: I've always wanted to hear 2007-era Yeasayer cover "The Chain" but I guess some things will have to remain up to the imagination...)

Over the summer, Fleetwood Mac revealed plans to tour in 2013. Details for that have still not been announced but the band continue to show signs that the tour is on the way. In a recent interview with Rolling Stone, Lindsey Buckingham revealed that he'd also like to record with Fleetwood Mac again:

"Absolutely, absolutely I would," he says of creating a new album. "In fact, about six, seven months ago, John [McVie] and Mick [Fleetwood] were over here and we actually cut some tracks, and we did enough for maybe half an album. But you gotta get Stevie [Nicks] on board with that, and at the time, she was really quite caught up in what she was doing . . . but I would love to do that because John and Mick were playing their asses off."

The band last released Say You Will in 2003.

Streams and tracklist are below.