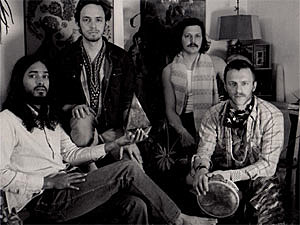 YEASAYER's first US tour w/ MGMT is finally winding down with one last sold out show in NYC and another sold out show in Philly. Thanks for all the support across the land and expect to see Yeasayer possibly in your area in April/May when they head out w/ Man Man. Promises to be a ball of thunder!

We do have another exciting announcement. YEASAYER will be performing on CONAN O'BRIEN this Friday, March February 15th! So make sure you are tuned in at around 1am for the one song set!

Again, thank you so much for the support and love. It fuels our mission.

Last night's show at Bowery Ballroom (Feb 13, 2008) confirmed what I already thought: I don't like MGMT, but Yeasayer are amazing/awesome/insert-one-word-that-means-I-think-they-are-really-great-live-here. The synced-up, psychedelic visuals Yeasayer were projecting on to the wall behind them were done really well too. Overall you could tell the band had just been playing every night for a month. They were better/tighter than ever, there was a lot to look at, and Bowery Ballroom was a great fit for their big sound.

Violens (playing their 7th-ever live show....as "Violens" anyway) were good too - especially a few of the songs. MGMT & Yeasayer do it again at Music Hall of Williamsburg tonight (except tonight Yeasayer play last). Man Man and Yeasayer dates, and a fan made video for "2080" (the song they'll be playing on Conan), below...