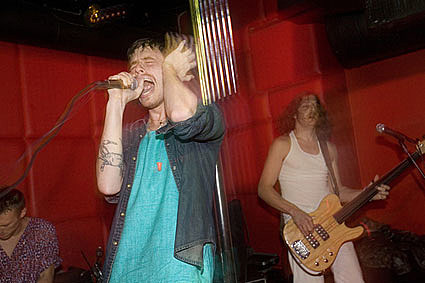 If you've read any reviews of my Friday show at R Bar, you know three things for sure: the Black Kids played, R Bar has stripper poles, and R Bar was packed.

Every place Black Kids played during the 2007 CMJ Music Marathon was mobbed. That’s not bad for a band that is still giving away its four recorded songs on its MySpace page, myspace.com/blackkidsrock. Black Kids were, it’s true, playing small places like the R Bar on the Bowery, where they shared the stage with a pair of stripper poles, and the Annex, where an amp gave out during their first song. [NY Times]

Most of those reviewers weren't there at noon when iLiKETRAiNS went on of course - at that time it was not packed (maybe 30 people?) (which is too bad because the UK band is really good live). For Brooklyn's Yeasayer though, it was also PACKED. This had in part to do with the fact that people were there to see Yeasayer...

One of the primary reasons I went to the BV party was to see Yeasayer, who my pals at Pitchfork had been talking up all week, with weird allusions to Vampire Weekend and 4AD; you could absolutely say I was intrigued. [17dots]

,and this in part had to do with the fact that Yeasayer went on right before Black Kids. Regardless, Yeasayer rocked the house.....

As much as I want to despise them, however, I don't. Songs like "2080" and "Sunrise" are kind of undeniable singles, they nail the harmonies (sometimes four-part) and the band are engaging performers." [Sound Bites]

He wants to hate them because he says they are hippies. HOAS adds,

There's both something legitimately good about this band, and a legitimate hesitancy to go nuts over them. The Fleetwood Mac + World Music thing is a good starting-point blurb, but the way the band incorporates its World rhythms and riffs is less appropriative than explorative; the songs where they go New Wave over (electronic) Native American beats keep the thing from settling into overthought mush. [heartonastick]

This band obviously has a lot of influences....

Wow. I’m not even sure how to describe their sound except to say that at one or many points throughout their 5-song set I heard the following elements: Men at Work, Annie Lennox, Genesis, Peter Gabriel, Joy Division, AND for some reason that only makes sense in my head and I know I will get crucified for this…wait for it…an inconceivably tasteful Nickelback in the hook for “Final Path.” And I LOVED it. Yeesh. [Ear Farm]

Nickelback....maybe. Let's just all agree that they don't sound like grunge...

Yeasayer don't sound anything remotely like grunge; their epic, cavernous sound relies too much on slippery crystalline guitar-lines and huge, thunking offbeats. More than anything else, their haunted keyboards and vague but fully integrated African influences recall Peter Gabriel by way of TV on the Radio, but their cascading thrum really doesn't sound like anything else I've heard. Still, I like the grunge parallel, if only because this band evinces the sort of all-consuming seriousness and desperation that those first-wave grunge bands had. [Village Voice]

Or to put it another way...

in short, though, yeasayer were fucking fantastic. [mr mammoth]

Check out an interview with the band at KEXP, and live videos (also from CMJ) at KEXP too. Download some live MP3s at Daytrotter.

Yeasayer are having a record release "dance party" at Glasslands in Brooklyn tonight (Oct 23, 2007), but according to everyone in the comments (and someone from the band), they are not actually playing.

They also have an upcoming Bowery Ballroom show that they mentioned at their last Cake Shop show, but it's still not listed on their tour dates, which are below.... 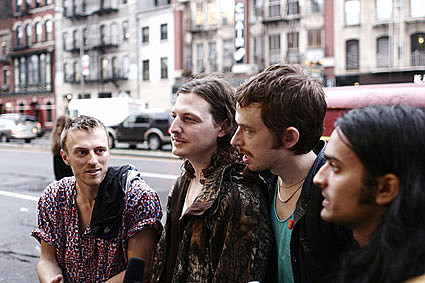