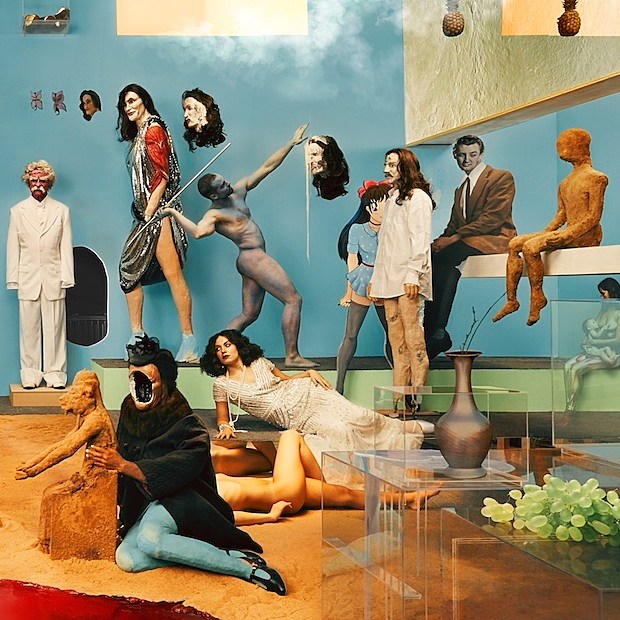 Yeasayer had been posting teasers on their website over the past few weeks, and now they revealed a full song called "I Am Chemistry" (as Pitchfork points out). It's kind of a psychedelic art rock song, and it eventually strips down to an acoustic guitar and piano and brings in a choir. It's certainly different from the tribal psych of All Hour Cymbals, the bubbly pop of Odd Blood, and the R&B-leaning Fragrant World. Listen below via Spotify.

Update: Yeasayer tweeted, "Someone behind the industry curtain jumped the gun. We have more to share, directly from US, in the coming hours."

UPDATE 2: Here's that info: Yeasayer revealed that the song will appear on their new album, titled Amen & Goodbye, which is due out April 1 via Mute. That's the artwork above (featuring sculptures by David Altmejd), and the tracklist is below. The album was recorded by the band with help from Atoms for Peace/Ultraista's Joey Waronker. They also mention that the new song features vocals by Suzzy Roche of The Roches, and it now has a video directed by New Media Limited. Watch below. Tour dates TBA.

Filed Under: Joey Waronker, Suzzy Roche, Yeasayer
Categories: Music News
Comments
Leave A Comment
Review: Weyes Blood shines again with the wondrous ‘And in the Darkness, Hearts Aglow’
Roger Waters’ ‘This Is Not a Drill Tour’ kicked off in Pittsburgh (pics, setlist, video)
Roger Waters previewed the “This is Not a Drill” tour on Colbert w/ “Another Brick in the Wall”
Yeasayer’s Anand Wilder joins us this week on Ch 66 for an interview & guest DJ set
Anand Wilder (Yeasayer) shares new song, announces NYC show
What’s Going on Sunday?