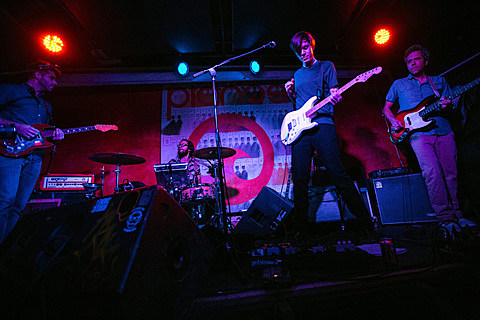 Yellow Ostrich released Cosmos at the start of the year and will finish 2014...by calling it quits. Frontman Alex Schaaf wrote on Facebook today:

alex here. Some big news to pass on today -- on December 8, Yellow Ostrich will be playing our final show as a band. We've had an amazing few years together, and we couldn't be more grateful and satisfied, but the time has come to move on to the next thing.

We want to give a huge thanks to all of you, for giving us a chance and listening. Connecting with you guys was the whole point, and we couldn't have gotten as far as we did without you. we went all over the world with this band, and it was a great ride.

Schaff also mentions that the first-ever full band Yellow ostrich show was at Glasslands in 2010 and they'll play one last show at Glasslands on December 8. Tickets for what they promise to be a "special show" are on sale now. It's one of a bunch of goodbye shows just announced by Glasslands, which closes at the end of the year.

Schaaf tell us "I'm sad to see it go, but i'm happy to be going out on a good note, we're all still close and there's no bad feelings." Meanwhile, he's already has announced his new project, Human Heat, whose first EP just went up on bandcamp. It's still recognizably from the same creative force that gave us Yellow ostrich, but now in a little more R&B direction. You can stream it below.