photo: Chris Squire with Yes in NJ in 2013 (more by Greg Cristman) 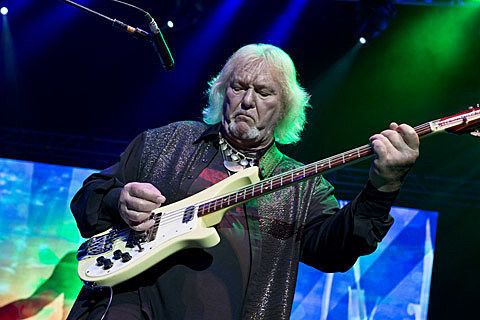 Chris Squire, the co-founder and longtime bassist of prog rock icons Yes and the only member of the group to feature on every studio album, has passed away just over a month after revealing that he was suffering from a rare form of leukemia. Squire was 67. Current Yes keyboardist Geoff Downes first tweeted the news, "Utterly devastated beyond words to have to report the sad news of the passing of my dear friend, bandmate and inspiration Chris Squire."

Yes confirmed Squire's death on their official Facebook page. "It's with the heaviest of hearts and unbearable sadness that we must inform you of the passing of our dear friend and Yes co-founder, Chris Squire. Chris peacefully passed away last night in Phoenix Arizona, in the arms of his loving wife Scotty," the band wrote in a statement. [Rolling Stone]

RIP Chris. You'll be missed and your music will live on.

Yes's upcoming tour is scheduled to hit the NYC-area this August. Watch a video of Chris playing "Close To The Edge" with the band in 2013, below...