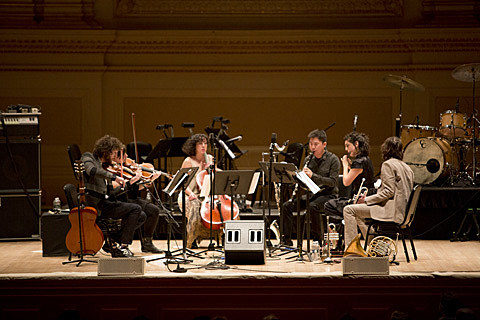 Contemporary classical sextet yMusic, who have worked with The National, Bon Iver, Dirty Projectors, My Brightest Diamond, and more, will be performing on Stage 2 at Rockwood Music Hall tonight (5/22), premiering works written by Sufjan Stevens, Timo Andres, and Marcos Balter, in addition to "less-new-but-still-pretty-new" works by Nico Muhly and Andrew Norman. Advance tickets for tonight's show are available. Doors are at 6:30. Did anyone catch them performing in a Harlem loft last night (5/21)?

yMusic are also performing with filmmaker Sam Green and The Quavers for a "night of outdoor music and cinema" on PIer 15 on June 20 as part of the River to RIver Festival and the Rooftop Films summer series.

In this ambitious, expansive reimagining of the art-song recital, the 21c Liederabend festival comes to BAM, featuring music by many leading lights from the international and New York contemporary new-music scenes.

Check out a video of yMusic performing the Annie Clark (St. Vincent)-penned tune, "Proven Badlands," for WYNC, below...