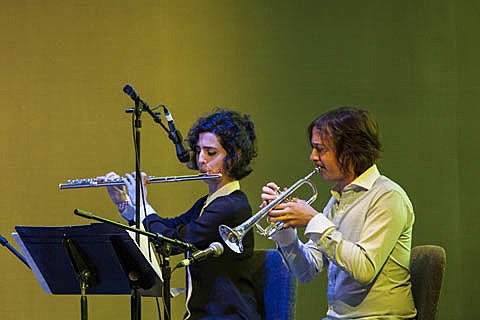 NYC contemporary classical ensemble yMusic (known for their work with My Brightest Diamond, St. Vincent, and others) have some upcoming shows scheduled for the end of this year and early 2013. On December 20, they'll play two shows (early and late) at the David Rubinstein Atrium at Lincoln Center with Jherek Bischoff (who's worked with David Byrne, Amanda Palmer, Parenthetical Girls, and others) and Deerhoof drummer Greg Saunier. The musicians will be teaming up at these shows to perform music composed by Jherek. Admission to both shows is free, though maybe they should consider making the shows fundraisers for yMusic's record label New Amsterdam Records who were decimated by Sandy.

Then, as mentioned, yMusic will open for Dirty Projectors at Carnegie Hall on January 11, and then join them on stage during their headlining set. The ensemble recently recorded with Dirty Projectors on their recent album, Swing Lo Magellan. Tickets for that show are still available.

In related news, Dirty Projectors release their new EP, About to Die, this week (11/6), which features the title track (which appeared on Swing Lo Magellan) and three new ones. You can stream one of the new tracks, "While You're Here," which David Longstreth tweeted was written for the late Gerard Smith (of TVOTR), and check out a list of all yMusic dates below.

Dirty Projectors - "While You're Here"