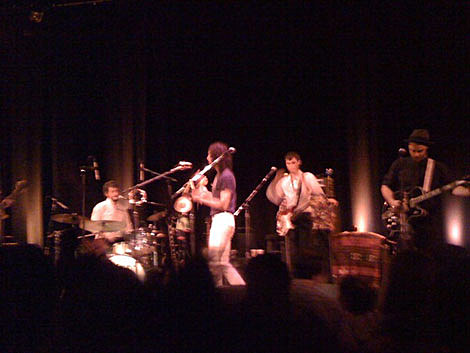 Devendra Banhart and his band The Grogs played last night (11/22) at Town Hall - their first stop on their tour's two date NYC run. Tonight (11/23) they'll be at Music Hall of Williamsburg. Little Joy open both - with the roles from Little Joy's headlining show at Webster Hall on October 2nd switched.

Barnhart is supporting his new record, What Will We Be, which came out October 27th on Warner Brothers. He appeared as one of the special guests at Yo Gabba Gabba's three-performance day at Beacon Theatre on November 21st.

In addition to running through Gabba song classics like "Don't Be Afraid," "Get the Sillies Out," and "Party In My Tummy (So Yummy)," the 11 a.m. show also featured a live performance by Devendra Banhart, who's sweet, acoustic "Little Yellow Spider" brought smiles to moms and dads' faces, even if it was a bit slow for the hyped-up kiddie mob, as well as a Dancey Dance from Brooklyn hip-hop artist Talib Kweli, who showed us how to do the Peanut Butter Squish. But the real treat was Biz Markie, who brought the show's beatboxing "Biz's Beat of the Day" seg to the Beacon, passing the mic to youngsters in the crowd so they could rock funky beats for the enthusiastic audience.[EW.com]

He wasn't the only guest at the program's three live shows. The second show's music guest was Dinosaur Jr. who played Terminal 5 with Sonic Youth later that night. The third's was The Roots who, like some of the other guests, appear on the new soundtrack for the show. Darryl "DMC" from Run DMC also appeared as the dance guest. Devo, who were in town that night didn't show up (though Mark Mothersbaugh does frequent music for the show).

The Roots played guest again one day later at Bowery Ballroom with the Dirty Projectors.

Yo Gabba Gabba Beacon videos with Devendra's Town Hall encore from Nov. 22nd, a picture of the setlist for an earlier date on the tour, and two videos of "Little Yellow Spider" (including one of him playing it for kids in Seattle in 2004) below... 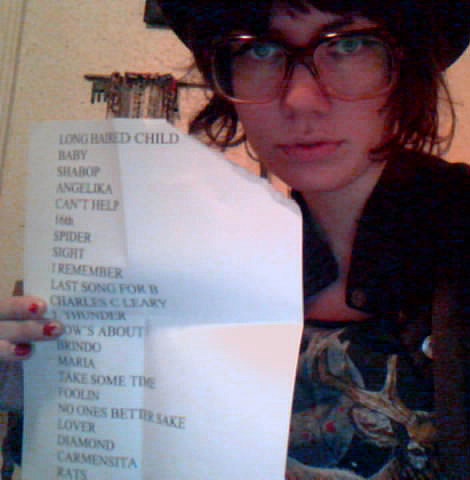 Dinosaur Jr at Yo Gabba Gabba