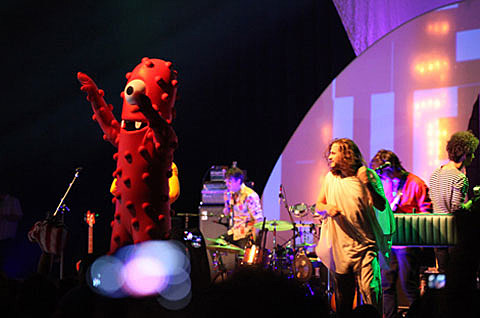 Yo Gabba Gabba! Live!: It's Time to Dance! hits over 50 cities in North America this fall. Hip hop legend Biz Markie and "Razzle Dazzle Gabba!-favorite "Leslie Hall join DJ Lance Rock and the colorful cast of characters on the new live tour. The trip kicks off in Minneapolis at the State Theatre on Thursday, September 15 and includes a six-shows-in-three-day run at NYC's Beacon Theatre on October 14-16 (shows are 11am, 2pm and 5pm). Other area dates include two shows at Nassau Coliseum on October 1 (2pm and 5pm) and NJ's State Theatre on October 11-12. Tickets are on Citi cardmember pre-sale now, go on other pre-sales Friday (6/3) at 10 AM, and then eventually on general sale starting Monday (6/6) at 10 AM.

--
Jack Black on Yo Gabba Gabba