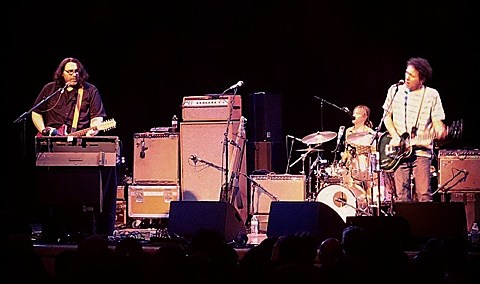 Then came the guests of honor: guitarist Ira Kaplan, drummer Georgia Hubley, and bassist James McNew. They began with "Ohm," off of their 2013 record, Fade. Normally a rather innocuous and--per its name--meditative track, here it was reincarnated as abrasive and noisy, with Ira flailing along with his guitar. They truly ripped the song to shreds, and this for their opening number. The rest of the set took the audience on a tour through Yo La Tengo's thirty years, featuring bygone gems "The Cone of Silence" from their debut album Ride The Tiger (with longtime YLT pal Dave Schramm on guitar) and "Upside-Down" from 1992's May I Sing With Me, as well as crowd favorites "Hey Mr. Tough" and an outstanding, nearly fifteen-minute-long version of "I Heard You Looking" with Feelies' guitarists Glenn Mercer and Bill Million along for the ride. Ira, in his classic striped t-shirt and jeans uniform, commented at one point that "the idea that we get to play with [The Feelies] in this century is so special to us," and the crowd heartily agreed. [Audiofemme]

Indie veterans Yo La Tengo celebrated 30 years as a band at Town Hall this month. They played two shows -- 12/3 with their old pals Antietam, whose members (and 9 ex-YLT bassists) joined them for covers of Urinals' "Surfin' With The Shah" and Neil Young's "Prisoners of Rock 'n Roll"; and 12/4 with another band of old pals, The Feelies, whose members joined them for several songs, including a few YLT originals and covers of Neil Young's "Time Fades Away" and Psychedelic Furs' "Pretty in Pink." Former member Dave Schramm and past contributor Chris Nelson also joined them for a few songs on night 2, including a cover of The Scene Is Now's "Yellow Sarong."

The Feelies' 11-song opening set on night 2 included a handful of their old favorites, and the following day they played a headlining show in NJ at Asbury Lanes with a 31-song set that included two new songs and covers of The Velvet Underground, The Stooges, The Doors, The Rolling Stones and The Beatles. Setlists from both Feelies show and both nights of YLT at Town Hall, below.

Yo La Tengo and Antietam also played The Troc in Philly on 12/6 after the NYC run, and you can listen to an audio recording of Antietam's full set over at NYC Taper. One song from it, "Hands Down," can be streamed below.

YLT's Ira Kaplan and Georgia Hubley also just performed this week at Jon Spencer and his wife/Boss Hog bandmate Cristina Martinez's holiday party. Bust was there and posted this Instagram, as was Jon Spencer producer Chris Maxwell who posted the one above.

Yo La Tengo's next show is New Year's Eve in Boston at the Hynes Convention Center. Tickets for that are on sale now.

James McNew of YLT also posted his favorite albums of 2014. You can find out who made his list, along with the YLT/Feelies setlists and the Antietam recording, below...

Yo La Tengo at Town Hall - 12/3/14 Setlist: (via)
My Little Corner of the World (Anita Bryant cover)
The Story of Yo La Tango
Stockholm Syndrome
Lewis
The Weakest Part
Season of the Shark
Stupid Things
Nowhere Near
Can't Forget
Tried So Hard (Gene Clark cover)
I'll Be Around
Before We Run
Autumn Sweater
Nothing to Hide
Tom Courtenay
Blue Line Swinger

Encore:
Did I Tell You

The Feelies at Town Hall - 12/4/14 Setlist: (via)
On the Roof
The High Road
Let's Go
Deep Fascination
Higher Ground
Away
The Final Word
Slipping (Into Something)
Too Far Gone
Raised Eyebrows
Crazy Rhythms

The Feelies at Asbury Lanes - 12/5/14 Setlist: (via)
Set 1:
Pass the Time (new song)
It's Only Life
Who Loves the Sun (The Velvet Underground cover)
For Now
Fun to be Happy (Love Tractor)
Change Your Mind
Invitation
Flag Day (new song)
Again Today
Nobody Knows
Should Be Gone
The High Road
On the Roof

Set 2:
Let's Go
Higher Ground
Waiting
The Final Word
Away
Slipping (Into Something)
Doin' It Again
Time Is Right
Already Gone
Raised Eyebrows
Original Love
Time for a Witness
Way Down
Real Good Time (The Stooges cover)
Encore:
Take It as It Comes (The Doors cover)
Paint It Black (The Rolling Stones cover)
Fa Ci-La
Everybody's Got Something to Hide Except Me and My Monkey (The Beatles cover)

Note: They also played Deep Fascination & On and On but I'll be damned if I can remember where in either set