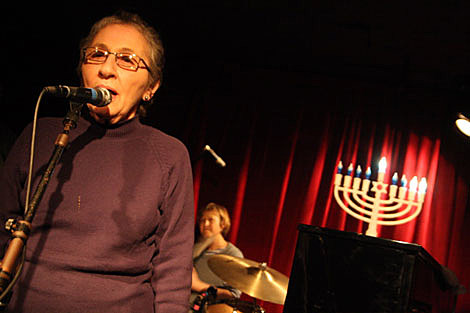 We actually have more pictures of last night's show coming, but in the meantime I can confirm that The Magnetic Fields did open Yo La Tengo's 2nd 2008 Hanukkah show at Maxwell's. Stephin Merritt also stuck around to sing again during the encore, John Hodgman was the comedian, and Doug Gillard and Ira's mom were the other singing special guests.

Tonight/Tuesday is night three (12/23), and I'm not sure we've figured out who the opener will definitely be yet. Do you know? Night one and two's setlists below...

The Weakest Part (slow)
Big Day Coming (fast)
Guess I'm Falling in Love (Velvet Underground)
Stockholm Syndrome
Winter A Go-Go
Sometimes I Don't Get You
Don't Have To Be So Sad (with Claudia Gonson, drums, and Sam Davol, cello, of Magnetic Fields)
Alyda
Five-Cornered Drone (Crispy Duck)
Autumn Sweater
Double Dare
Decora
Watch Out For Me, Ronnie
The Story of Yo La Tango

*(encore)* with Britt Daniel of Spoon on vocals, minus "Ring of Fire"
Ring of Fire (June Carter Cash) (with Paul F. Tompkins on vocals)
Public Image (Public Image, Ltd.)
Mother and Child Reunion (Paul Simon)
Me and Mr. Jones (Amy Winehouse)
This Guy's In Love With You (Bert Bacharach/Hal David)