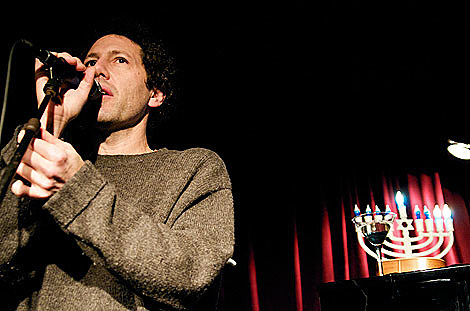 Thanksgiving is not even a week past, but Hanukkah is already here and that means eight Yo La Tengo shows at Maxwell's in Hoboken. One for each night, they shed a sweet fucking setlist and opener and comedians and special guests and charities and mixtapes and who knows what. You never really know what you're going to get until it happens, but we can try and figure it out. Who will open each show?

Well, we already know The Parting Gifts are scheduled to appear on night two.

Who else seems likely?

The Greenhornes played Bowery Ballroom last night (11/30) and have nowhere to be until December 5th. Ted Leo kicks of a tour on 12/2, so if he's a special guest, it has to be tonight (12/1) or 12/5 (his night off). He's back in town on 12/6 to play Terminal 5 with the New Pornographers, but there's no way he could do T5 and Maxwell's in one night (and he's back on tour right after). The New Pornographers (AC Newman and Neko Case included) on the other hand have almost every single other night of Hanukkah free (and AC Newman's show with John Wesley Harding isn't until December 17th) (John Wesley Harding is free all days except 12/5).

Kurt Vile plays Knitting Factory on December 3rd and has all other days of Hanukkah off. Jeff Tweedy, John Stirratt, and Pat Sansone are playing Bowery Ballroom on 12/4 and Tarrytown on 12/6, but are free on 12/3 and 12/5. Nels Cline is in NYC on 12/6, and is free 12/7 and 12/8 (but it doesn't look like he'll be around the same time as the other members of Wilco unfortunately).

The Feelies have no conflicts or upcoming dates at all. Mission of Burma play Maxwell's and the Bell House in January, but you never know, maybe they'll come down for this too. Stornoway seems like a longshot, but they are in town on December 2nd and free 12/1, 12/6 and 12/7. Warpaint play Manhattan on 12/1, Brooklyn on 12/2, Philly on 12/3 and DC on 12/4, and then are free after that.

Titus Andronicus, who by the way are opening for Passion Pit at Wellmont Theater on 12/30, have to be in Florida to play a show with Superchunk on 12/4, but are otherwise free. Superchunk have from the time they finish that Florida show until 12/9 to get to Toronto to open for Broken Social Scene. Superchunk are next scheduled to be in NYC in March to open for Bright Eyes who recently popped up as a guest at a NYC show. Screaming Females, who opened for Yo La at Brooklyn Bowl recently, are recently home from Europe and totally free.

UPDATE: Night One featured an opening set by M. Ward and comedian Todd Barry along with Nash Kato of Urge Overkill as a special guest.

UPDATE2: Syl Johnson & JC Brooks are in town this week too

UPDATE3: Richard Buckner is around this week too

All the Maxwell's shows are long sold out, but Craigslist is hopping. Leave tips and more ideas in the comments. Tour dates for most of the artists mentioned in this post, below...