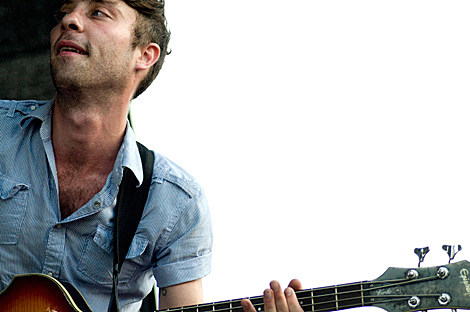 NY Times. As an experiment I put your name into Pandora, the Internet radio service, to see if any of these other bands came up as references, and they didn't. But Lambchop and My Bloody Valentine are two bands I'm not surprised are on your list.

MS. HUBLEY of YLT: Lambchop is a band that has meant so much to us, musically and personally as well. We've become very good friends with them. I'm not sure how much we overlap, although I think we do some.

MR. KAPLAN of YLT: I think we overlap a lot with them actually. I hear their music in things we've done; I hear our music in things they've done. I first heard them [15 years ago] at the Merge Records five-year anniversary. I was just completely blown away. It may not have been until the Black Lips that I saw another band onstage that I'd never heard and thought, "Wow, that's amazing."

That helps explain (not that it needs explaining) why the Black Lips are opening for Yo La Tengo at Roseland Ballroom in NYC on September 25th. Tickets are still on sale.

Check out the rest of that NY Times article for more on what Yo La Tengo are listening to (including their Matador labelmate Kurt Vile). Yo La Tengo's Popular Songs will be out September 8th on Matador. "Here to Fall" and "Periodically Double Or Triple" from the record are re-posted above.

Not mentioned in the New York Times article, are Times New Viking, who are also YLT's labelmate, have opened for then on Hanukkah, and who star in YLT's new new video for the song "Nothing To Hide" (re-posted below).

The Roseland show is part of an extensive fall tour in support of Popular Songs. Those dates, along with a series of videos all from the new album (they've been releasing one each week), are posted in full below...

Yo La Tengo - "Nothing To Hide"

Yo La Tengo - Here to Fall

Yo La Tengo - "Avalon Or Someone Very Similar"

One or two more videos like these will be released before the album is released. Dates...