Yo La Tengo during Chanukah 2010 (more by Chris Gersbeck) 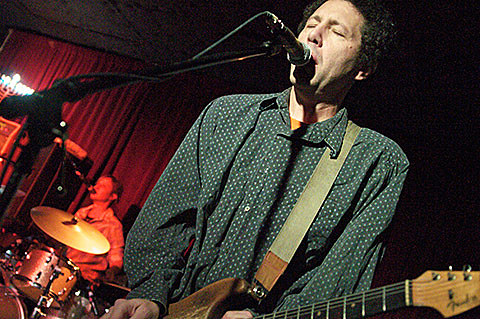 Yo La Tengo have scheduled a new round of dates, and they aren't Jewish holiday-themed benefit shows or to raise money for Japan, but they will, like the upcoming Elvis Costello shows, contain a special aspect. The band writes:

"For our ...[upcoming] tour dates, we've decided to take the advice of Blood, Sweat & Tears to "ride a painted pony/let the spinning wheel spin." And just in case that's not self-explanatory, read on..."

We're going to split our performance into two sets. At the beginning of the night, we'll bring a Wheel of . . . Fortune? Fate? What ARE those carnival things called? . . . on stage, and spin it. Whatever comes up, that's what the first 45 minutes will be. Here are the possibilities:

2. Dump:
Why should Nijmegen and Claremont get all the fun? Is this the night Dump plays your town? Only the wheel knows.

3. The Freewheeling Yo La Tengo:
You ask a question; we answer the question, and maybe follow up with a song.

4. The Name Game:
Have you ever noticed how many Yo La Tengo songs include someone's name? More than 45 minutes' worth, that's for sure, so who knows which ones we'll do on any given night.

5. Sitcom Theater:
The lucky audience in attendance the night the wheel lands on this space will get to see band and crew act out a classic sitcom.

Yo La Tengo does Seinfeld