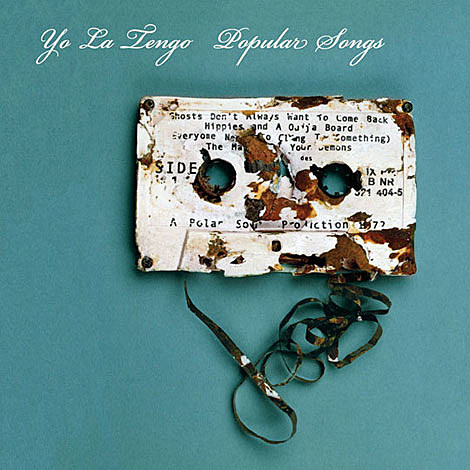 We have an old saying at Matador HQ, "the only thing predictable about Yo La Tengo albums is their high level of excellence and crazy amount of musical ground covered". Trouble is, even if you believe we really have an old saying that unwieldly, it doesn't really do justice in this instance. The new Yo La Tengo CD/2XLP/digital album 'Popular Songs" (OLE 856-1,2) could be the bravest musical statement to date in a career full of 'em. Recorded in Hoboken and Nashville in early 2009 with longtime associate Roger Mountenot, 'Popular Songs' finds the trio of Georgia Hubley, Ira Kaplan and James McNew at the height of their creative powers, fashioning an epic work that's cooly confident as it is wildly adventurous.

Yo La Tengo have one NYC show coming up. Ira Kaplan's sometimes-band The A-Bones have three. James McNew's band Dump has two - one with Oneida, and one August 22nd at Union Hall with Choo Choo La Rouge, Clint Michigan, and Jennifer O'Connor. That Brooklyn show is a Kiam Records release party. Kiam Records is Jennifer's label and she's released a bunch of 7" splits...

"Our split 7" single is finished and on sale now, alone or as part of a five record subscription series from KIAM Records, featuring collaborations between Jennifer O'Connor and guest artists. We join Jennifer on the A side for "Little Airplane Heart," and we each contribute a song to the flip: "Mostly Air" from our forthcoming album, and "Watching You Go" from Jennifer.

The artists collaborating with Jennifer on the rest of the series are Dump, Jesse Sykes, Mascott, and the Hotel Lights." [Choo Choo La Rouge]

Clint Michigan will be one of her future releases.

New Yo La Tengo song above. Some clips of YLT playing at last week's Primavera Sound Festival in Barcelona, below...