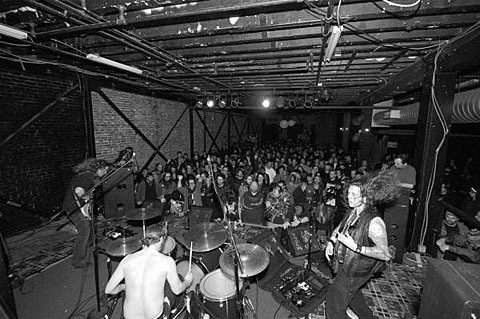 I am proud to announce the latest addition to Full Metal Texas (happening during the day at Emo's on 3/17): YOB! The Northwest band will be making their first Austin, TX appearance in at least five years (since their original split) on the BrooklynVegan / 1000Knives stage at Full Metal Texas. The 100% FREE show will also feature Trap Them, Hull, Rwake, All Pigs Must Die, Goes Cube and Kvelertak (hopefully).

Yob will also play one other show while in Austin. It's with Agalloch(!) at the previously discussed/impressive Nanotear official showcase later that night at Barbarella Patio. They have no other dates, not even Roadburn.

Out stage at Full Metal Texas is one of nine shows BrooklynVegan is doing at SXSW this year. Goes Cube kick off their tour to SXSW at The Studio at Webster Hall in NYC on 3/9.

Full/final details on Full Metal Texas are coming tomorrow, but for now check out a video from Yob's 2010 performance at Scion Rock Fest.