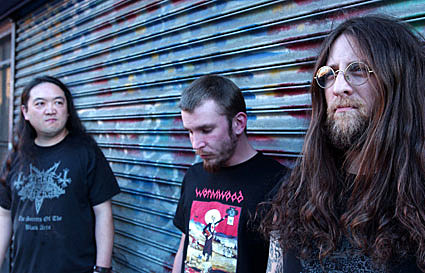 A little good with the bad. Age Eternal (formerly known as Middian) have unfortunately announced their dissolution in the wake of their legal woes with the band Midian ("I have only one 'd' in my name, but that don't mean I ain't getting your royalties!"). Sad news, here's what the band had to say:

Sadly, the lawsuit came with a high cost to us personally and interpersonally. Scott Headrick is quitting the band and moving. Mike S felt he needed to back off from touring due to family and work/lack of work issues, cutting his touring commitment from 60-70 shows a year to a handful of shows, mostly local to the West Coast, for an indefinite amount of time, maybe permanently.

This extreme change in direction, coupled with the immense stress of our lawsuit and inner conflicts in the band resulted in Scott's decision to move on with his life. Scott Headrick is the highest caliber of person. We mourn his loss, and support his need to take care of himself.

We are very sad to share this news about Age Eternal, but are confident that it must and will open the doors for new music creation and growth.

Here's where it starts to get better:

Will Lindsay and Mike S will continue to write music with the goal of recording and doing some shows, under another name, as a new band and not Age Eternal. And with Will's now full-time commitment playing guitar with the immaculate Wolves In The Throne Room, people should be expecting to see him in their hometown in the USA and abroad very soon.

So, a new band by Mike Schiedt (ex-YOB) and Will Lindsay. Thats exciting. Here's something that is waaaay more exciting:

YOB is reforming to record a new album and do a limited number of shows. We have a number of new songs we are working on and our goal is to record in the Spring for a Summer 2009 release. We are very excited about this new material.

YOB will be doing a very small amount of shows to support our new recording. We hope to do 2-3 shows on the west coast, 2-3 on the east coast, and maybe get over to the UK/Europe for a couple of shows if promoters over there feel it would be worth their $$ to bring YOB over for a very short run. We will not add any other shows to these except in rare instances.

Um, maximum stokeage. The band has also posted a "rough jam room demo" of a new track, "Breathing From The Shallows", to their myspace.