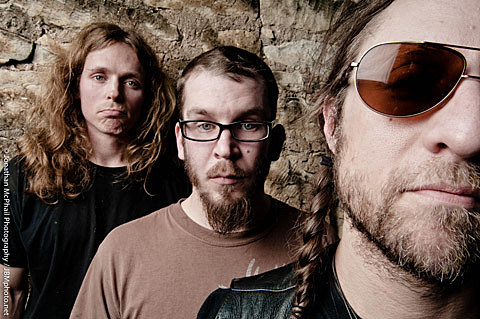 NYC, the time has come! I am happy to announce that after calling it quits, reforming, and teasing us with festival appearances, Yob will return to NYC to play Le Poisson Rouge on July 12th with Dark Castle as part of a larger US tour for the pair. Tickets are on sale.

Though the entire tour routing has yet to be revealed, the Yob/Dark Castle campaign of doom-destruction includes dates in every region of the US, including a bunch that the band hasn't played since reforming (read: pretty much everywhere but the West Coast). BrooklynVegan is the proud sponsor of the entire Yob/Dark Castle trek, including the Blackened Music Series-presented NYC stop. Stay tuned for more updates as they become available.

Dark Castle is preparing to release their upcoming LP Surrender To All Life Beyond Form via Profound Lore on May 17th. I recently interviewed vocalist/guitarist Stevie Floyd (happy birthday!) about the LP, and Dark Castle recently played the Profound Lore/BrooklynVegan day party at Lovejoys during SXSW.

Yob is currently prepping their new LP and follow-up to the collossal The Great Cessation, one of my favorite LPs of 2009.