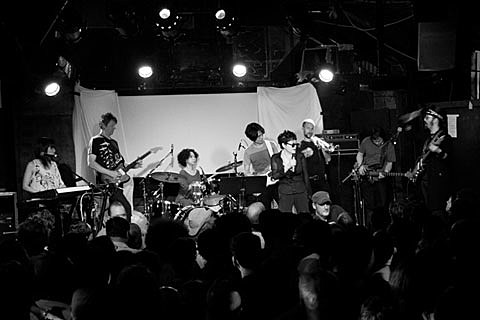 "Sure, sure Kanye was playing somewhere in the city limits (with Jay Z as a special guest! OMG! #bigpimpin), but this was Yoko Ono, the queen of avant garde rock, and an influence on female artists of all stripes for the last four decades.

For all the heated anticipation in the air of the audience and her son Sean's comment that "Yoko has entered the building", she arrived on stage at the relatively small Elysium without any fanfare.

Joined by her new millennium version of the Plastic Ono Band (Sean on guitars and leading the band, master guitarist Nels Cline, and jazz bassist Trevor Dunn among them), she flashed a huge beaming smile at the crowd, flashed some peace signs and set to work ululating and gasping her way through a selection of improvisations and classic material like the stunning "Mind Train", a 1971 epic turned into a lean high speed commuter rail like via the three guitars on stage and the vibrant pulse of Dunn's bass.

Music aside, it was a sight to behold this 78-year-old artist working with the energy of someone a quarter or her age and flirting with all the men and women in the front row. All of us, even an exhausted 35-year-old music writer looking forward to heading home can take inspiration from that." [Oregon Live]

Tune-Yards also made a special guest appearance right before Yoko Ono went on Saturday night at Elysium, and If By Yes and The Ghost of a Sabre Tooth Tiger were among those on the eight-band bill.

Yoko Ono and friends will return to the stage for a benefit show at Le Poisson Rouge in NYC on Tuesday, March 29th, dubbed "To Japan With Love" featuring Yoko Ono Plastic Ono Band, Patti Smith, Tony Shanahan, and Cibo Matto. $100 tickets are on sale now. The benefit Yoko is playing for the same cause two days earlier at Columbia University's Miller Theater is sold out.