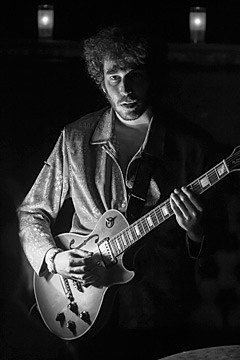 Former Monotonix frontman Yonatan Gat will release his new solo album, Director, on March 3 via Joyful Noise. As you can hear from album track "North to South," he dabbles in a variety of styles -- some on the avant garde side, some that lean toward pop -- often all at once. Listen below.

To really get the Yonatan Gat experience, you really need to see him live, as he smudges the line between performer and audience. As long as you're prepared to be an active participant, his show's fun. Gat will be touring on the way to and from SXSW, kicking things off with an NYC record release show at Union Pool on March 3 with Beech Creeps, and the Kid Millions / Jim Sauter Duo. Tickets are on sale.

Right after that, he'll be on tour with Of Montreal including their March 11 show at Webster Hall (tickets). Some of the Of Montreal dates (not NYC) are also with Deerhoof. All dates are listed below....