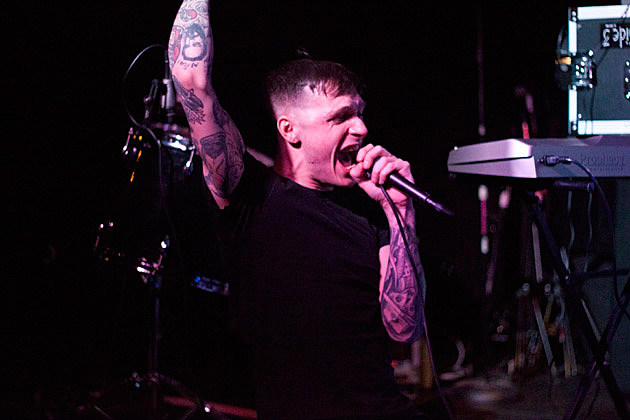 If you're not familiar with the NYC duo York Factory Complaint, you may know some of their other projects--Ryan Martin is the co-founder of Dais Records, and Michael Berdan also is/was in Believer/Law, Uniform, Veins and Drunkdriver. Their new album, Lost In The Spectacle (preorder) is a hellish, disgusted trip through noise-drenched industrial waste. A track, "Loved," is streaming at NPR along with a Q&A with the band in which they expound upon the theory-intensive concept behind the album. Here's a bit:

Otis Hart: Lost In The Spectacle is the name of your new album as York Factory Complaint. Is that the same "Spectacle" French philosopher Guy Debord addresses in his book The Society Of The Spectacle?

Now, it's a pointless exercise in futility to rebel against the Spectacle, as it absorbs all that it touches. So what can we do? We can acknowledge it for what it is and stare it dead in the eyes. Through a series of conversations, we decided that we wanted to make something that openly acknowledges the fact that taste and politics are bought and sold and how everything we create is just another cog in the Spectacle. This record is about our collective spiritual death.

Michael's Uniform project next play on July 31 at Union Pool with Noothgrush and Trenchgrinder.

Stream that Thought Broadcast song, with the full upcoming Nothing Changes schedule, below...