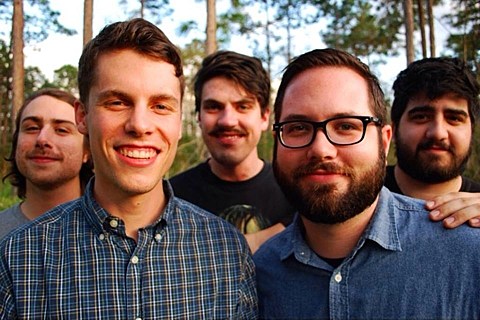 You Blew It!'s new record, Keep Doing What You're Doing, which came out this week via Topshelf, is one of the more buzzed about emo records since all this talk of "emo revival" exploded onto the internet, and for good reason. Their last LP, 2012's Grow Up, Dude, was pretty in line with all the "twinkly" emo that made up most of this "revival," but KDWYD feels reactionary to that, packing a more aggressive, "rock" style punch. The band, and their producer Evan Weiss (of Into It. Over It., Their/They're/There and many others), shed some light on that in a new studio interview video that makes its premiere in this post. The band talk about their more straightforward rock influences (Foo Fighters, Jimmy Eat World), and the whole thing is pretty revelatory if you've been itching to know more about this record. There's some clips of them recording in there too. Check it out below.

You Blew It! bring their tour with Prawn and Crying to NYC on February 8 at Shea Stadium with Living Room.

Evan Weiss also brings his Into It. Over It. tour with The World Is A Beautiful Place and A Great Big Pile of Leaves to NYC on February 21 at Bowery Ballroom with LVL UP. Tickets for that show are still available.

Video and a stream of Keep Doing What You're Doing below...

You Blew It! 'Keep Doing What You're Doing' Studio Interview