Coincidentally, I took this picture of Les Savy Fav playing Guitar Hero at SXSW this year. I'm glad I waited four months to post it...

Jerry asked:
If you had to select a LSF song to be in Guitar Hero III, what would that be? Also, a non LSF song.

Seth Les Savy Fav answered:
I'd have to go with either "Pills" or "Adopduction" off of Go Forth OR "The Sweat Descends" from Inches. "Pills" has a lot of variety - both chords and single-note progression. "Adopduction" would fit nicely in the top 2 tiers of the game - it's not a face melter, but it has it's chops. "The Sweat Descends" is just guitar mania and a crowd-pleaser. As far as non LSF tunes, I'd say early Metallica - preferably "Master of Puppets" for its scope and orchestration.

Tom from Las Vegas asked:
What exactly did you guys do that lead to you being banned from the New Frontier in Las Vegas? And, are you excited that the hotel/casino is closing at the end of the month and will be imploded soon after? 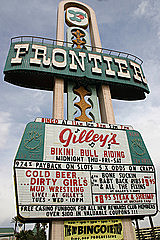 It should be noted that the band is not technically banned from the New Frontier in Vegas- only me. If they chose to, the rest of the guys could perform there with Tim "Ripper" Owens [former Judas Priest replacement]- or with me via satellite hook-up. The briefs of the story (pun intended) are- that we performed a party show there as part of some fashion week thingy. The place is known for being the "wildest" spot on the strip. It did have sawdust on the floor, and a mechanical bull. Before we performed there was a mud wrestling contest featuring bikini babies groping each others muddy gussets in a shallow pool of slick gray mud. Anyway- I got kinda worked up with all the "debauchery" and the sound guy gave me a wireless mic. I rode the bull. I moved my moves. I stripped down to my briefs and hopped into the mud pit. It seemed obvious to me. The bulky staff didn't like the show one bit and after a few choice moments happy as a pig in mud I realized that the pit was no longer surrounded by fans but by meat heads in black embroidered "New Frontier" golf shirts. In an attempt to extend my visit to the mud I pretended that it was too slippery for me to get out of. I flipped, flopped and pratfalled my way to the edge. I groped a bouncers hand and tug gently, he was too big to "accidentally" pull in so I let him pull me out but then slipped like a lil' fish out of his big fists and made my way back to the stage. Being muddy as the Golem (from Batman comics) made it hard to see or operate my keyboard though so between songs I stepped out the stage door into a back alley to use the hose shower the girl wrestlers had used. Out there I found the manager, I should have noticed that he wasn't smiling but didn't. 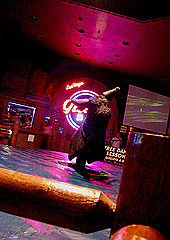 Oblivious I asked him if he could turn on the hose, he told me to hold on and went presumably to go turn it on. I'd been feeling pretty good and could hear the guys starting up the next song when suddenly it dawned on me that the dude I'd just talked to was not a friend. I scampered back onto the stage and we continued the set. From the corner of my eye I saw the manager standing at the side of the stage, whenever I went near where he was he'd kind of rear up, bearing his fangs (like from that one scene in Coppolla's Dracula) Maybe he though he'd grab me. Anyway when we finished we all stepped out into the alley and I thought "by-gones will be by-gones "and "what's done is done" and stuff like that but I was wrong again. In a flash I realized that the "after show" party I was enjoying in that alley was attended by only myself and the unhappy staff of the New Frontier. They kept me out there surrounded, in my underwear, covered in mud- in a lot of ways I probably looked like a super hero- surrounded by an unreasonable number of trained security, all nervously awaiting my next move, a supernatural leap, a lightning fast roll. It was pretty sweet. The rest of the band and our friends kept peaking out the door giving me updates (and eventually pants) I was to be arrested. I tried some disarrming humor on the guys who held me, "Do your balls get a weird rash when you mud wrestle?" Nothing. Anyway, this story is getting too long. After what felt like for ever the manager came back and told me I was being 86ed from the casino. This means that they take finger prints, photograph me, and have their on staff LVPD officer write me up and excort me to the property line. The manager cuffed me and told two of the fat boys to walk me around the back of the casino to the "lock up" As they lead me out into the dark, empty parking lot I asked they guys candidly, "Are you going to beat the shit out of me" finally they smiled but didn't say no. We got around to a side entrance and they dropped me off politely into a small office which housed a police man. he was very much nicer then the rest of the staff and he thought the concert sounded funny and cool. We agreed that being 86-ed and never allowed back to the New Frontier was probably the dream of most of the staff. He walked out to the curb and put me into a cab reminding me to never return. I'd won about 15 bucks at the slots and I didn't have to load out our gear, or clean the stage, so I'd say it was a win. That's that story. Sorry if I sound too smug, the "New Frontier" episode is one of my proudest moments.

Keep sending in those questions, and Tim & band will keep answering! More answers coming soon, and more answers in part one.