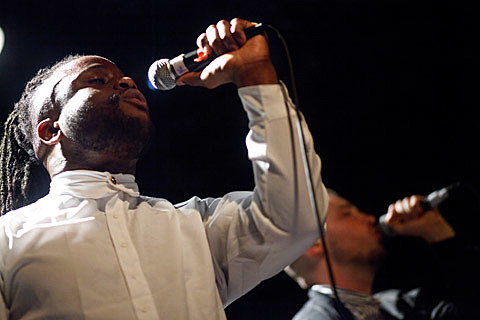 You might characterize their sound as alternative hip-hop: they're signed to the LA label Anticon in the US, home to rap experimenters including Beans and the various ex-members of cLOUDDEAD. There's certainly plenty of sonic weirdness on Dead. That African-accented voice on opener No Way is rapping over a wheezing harmonium, a pounding, Suicide-like drum machine, some bizarre massed vocals and a distorted keyboard endlessly playing two sickly, off-key notes. Just Another Bullet is built around an unsettling noise that sounds like an kids' toy that's running out of batteries, and Mmmh Mmmh stumbles along in a haze that recalls the disorientating wooze of My Bloody Valentine. But all this is offset by the fact that Young Fathers' three members sing as well as rap - in voices ranging from a sweet falsetto to a raw-throated bark - and virtually every track comes with a massive pop hook. [The Guardian]

Above is a review of Dead, the proper debut album by Scottish alternative hip hop trio Young Fathers that won the Mercury Prize last week. As that review gets across, it's a very multi-genre record that's hard to pigeonhole. If you've yet to hear it, you can stream the whole thing below.

Young Fathers are kicking off a European tour in Germany tonight (11/5), and they have plans to return to North America in 2015. No tour announced yet, but we know they'll play NYC on April 10 at Music Hall of Williamsburg. Tickets for that show go on AmEx presale today (11/5) at noon with a general on-sale starting Friday (11/7) at noon. Their last time here was opening for their Anticon labelmate Baths. Anyone catch that?